Making a Mole Hill out of a Mountain 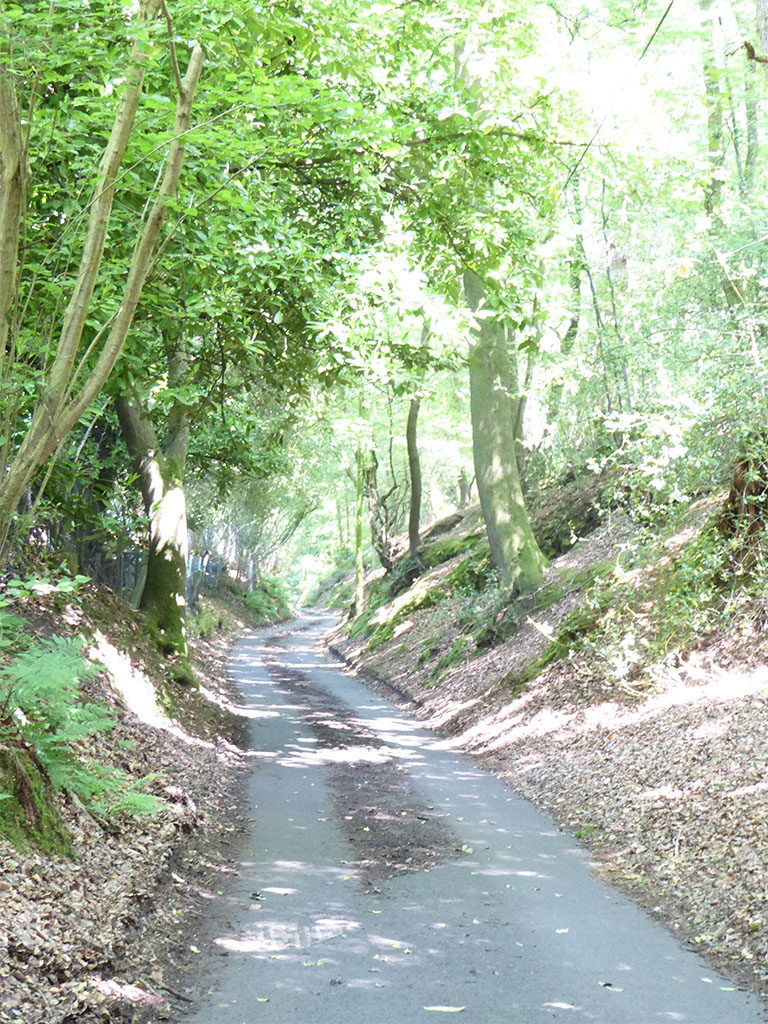 The sky was no longer blue but green as the branches of the tall trees high above my head formed a leafy parasol, keeping me in the shade.  The breeze was cool and refreshing.  A few metres away, a shaft of bright light shone through a gap in the treetops like a light streaming from a torch. The infamous words of Captain Kirk from the Star Ship Enterprise filled my head “Beam me Up Scotty” which made me smile.

Decades later, no longer in Australia’s Daintree Forest but in a car park somewhere in the Surrey Hills, the green bracken covering the floor and the leafy sky had taken me back to a memory long forgotten.

As I looked around me, the dry mud was a positive indication that I wouldn’t have to clean my bike later. The realisation that I was looking at mud not tarmac was difficult to compute and it took a while to adjust to this very unfamiliar cycling environment. 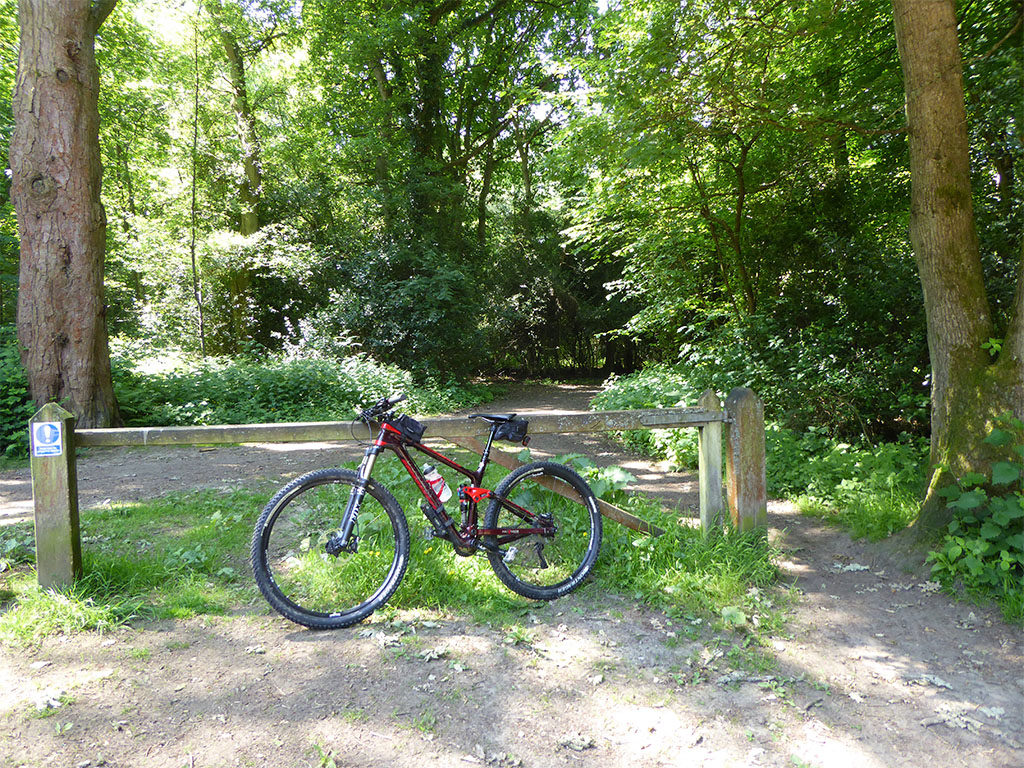 In three years, a lack of hill climbing has become a total hill-phobia. I have been avoiding hills like the plague. Cycling up hilly roads in London with the pressure of traffic behind you is not a great place to train.

A couple of months ago some very kind CTC Reading MTB peeps let me join them on their ride and cajoled me around the Chilterns. The joy of being off-road was immense, no fuming drivers on my back wheel but I had a lot to learn and I haven’t been up a hill since. It was time to change this Status Quo and the time was now.

A quick Google a couple of weeks ago led me to Singletrack School who run coaching sessions and led rides in Surrey.

As their man Andy walked towards me I could see that hills were not a problem for him – his legs looked as though they were made of steel. I made the first MTB-newbie mistake by asking if his bike was new. It wasn’t, it was simply that he had cleaned it…!

After a quick chat, we headed out of the car park. Being primarily a road cyclist it is a very scary thing when cycling towards bracken but that is what we did.  Along a narrow trail, bumping around tree stumps and down a hill to a clearing where the concept of being-at-one with the mountain bike was discussed. It was a real eye-opener to see how disconnected I was with this bike when I am so at home on a road bike and cycling on tarmac. 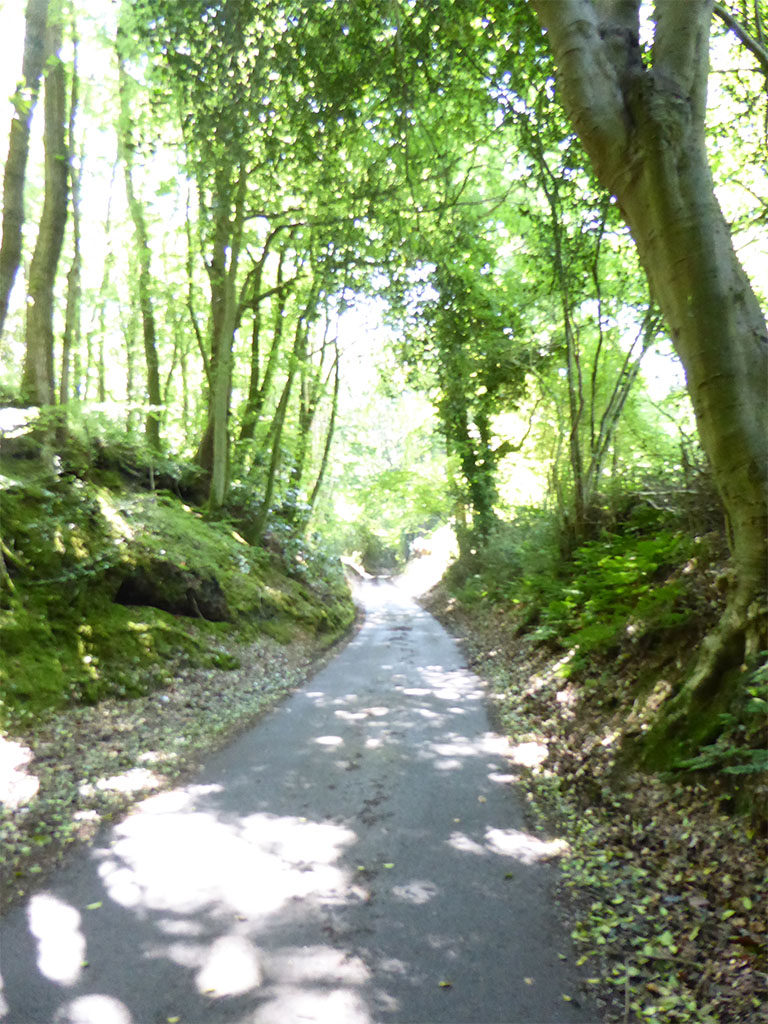 After 10 minutes, I was able to cycle up a small incline really, really slowly whilst standing up – the sort of cycling that you see at traffic lights in London whilst people are determined not to put a foot on the ground (sometimes even if it means they swivel a full 180 degrees facing the traffic….)! Taking on board Andy’s advice in no time at all I found myself sitting on the back tyre – literally – on the descents, still covering my brakes! Hilarious!

It was soon time to head back into the bracken. A descent through the woods, staying out of the saddle, rolling over tree roots, rocks and drops it was quite extra-ordinary.

A quick turn to the left and we were cycling up a steep incline. My new tip to stay in low gears whether cycling up or down hills meant I could just keep spinning.  As soon as I heard the back wheel skid I moved my weight to the front of the saddle and handlebars. Somehow having the peak on my helmet over my eyes meant I couldn’t see how steep it was so just kept pedalling. At the top of the hill my heart was pounding. Recovery to normal heartbeat took about a minute! But I had reached the top without stopping so this was real progress. 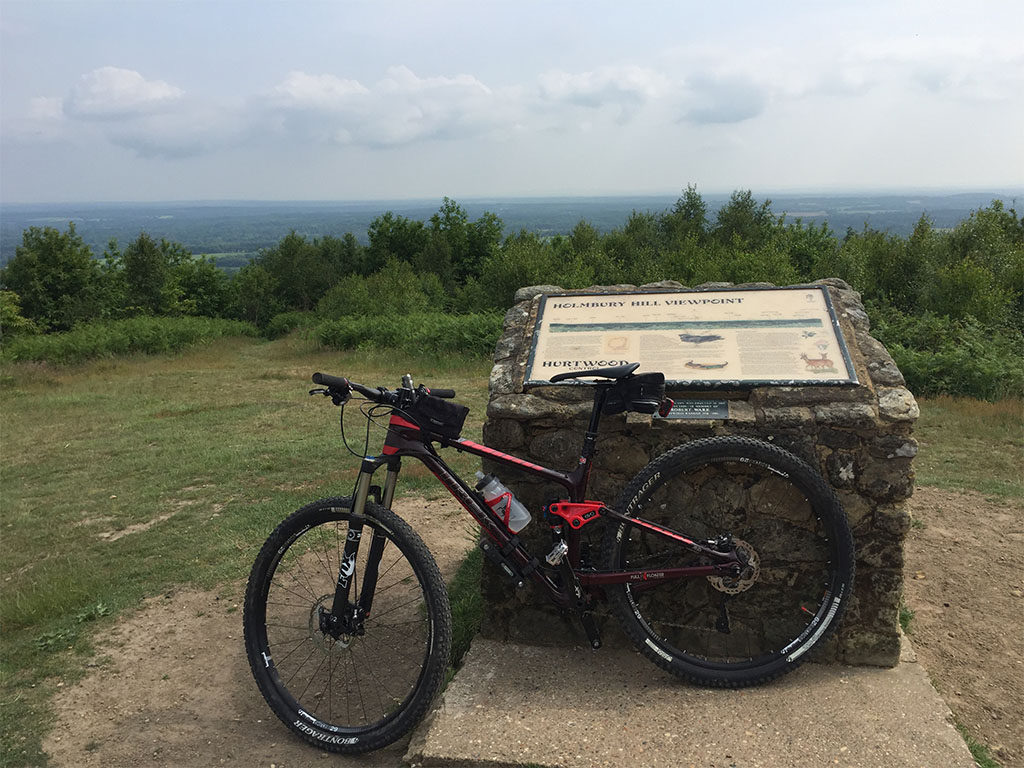 The conversation moved to ski-ing (as you do) and how using the edges of the skis actually steers them. I wondered where this was going.

We cycled down another descent to a different path and the introduction of cones. The concept of cycling around objects using your weight and tyres rather than the handlebars and the brakes was introduced. I had to ask this to be repeated.

Whilst this information was being processed, there was a large whooshing sound from my tyres. Andy was letting some of the air out! It seems the PSI (pounds per square inch) imprinted on the tyre was not necessarily a required maximum and having the tyres feel like oranges rather than hard crispy apples made for a better mountain bike ride. Of course, he was right and the total opposite to riding on the road.

Another demonstration watching how to use the bike as a counterbalance, to grind the nobbles on the sides of the tyres into the ground and use them as brakes whilst keeping the body upright was, quite frankly, mind blowing.

Needless to say, after a few attempts and some more brilliant coaching from Andy I was actually able to do this. It was quite extraordinary. 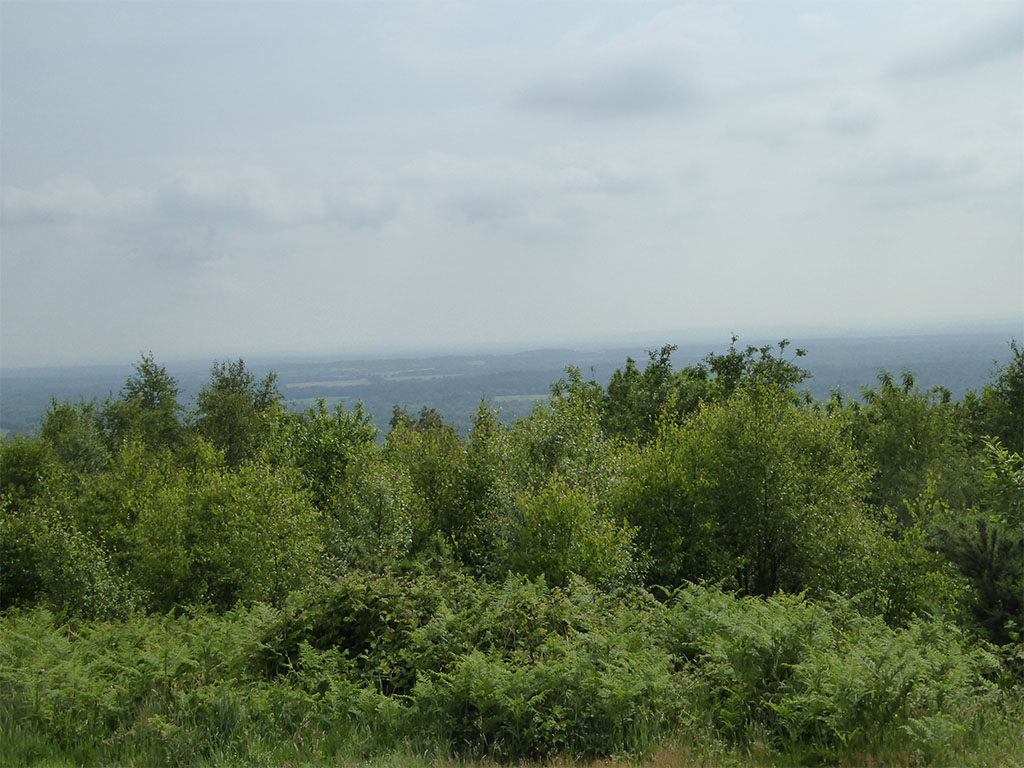 No longer was this bike running away with me – I was in control of it.  We rode up another track and down the other side of a climb. I followed the line Andy was taking until I saw him do a jump inbetween two trees and over a mesh of roots and a drop.  Like a horse refusing to jump at a gymkhana I instinctively threw on the brakes and did a text book National Standard emergency stop just before the trees.  Andy took my bike up the path so I could have another go. Nope! Another instinctive sudden stop before the trees. Again, I had to try it again! I wondered whether I was still going to be there at teatime. On the third attempt, with Andy giving some more advice I shot through the gap, stayed on my bike and carried on down the track. Wow!

The trail widened just before Andy shot off into some more bracken and we started climbing again. Spin, spin, spin, weight forward, spin, spin, spin and there we were at the top of Holmbury Hill.  Approximately 261m above sea level.

As I headed for home via a well-earned cup of tea at a lovely pub in Gomshall I was able to reflect on the day’s events.  Cycling isn’t one dimension, it’s multi-disciplinary.  Being competent in one doesn’t make you as competent in another.

Keeping an open mind and being receptive to new information really opens up what you can achieve, whoever you are, wherever you are and regardless of how old you are. 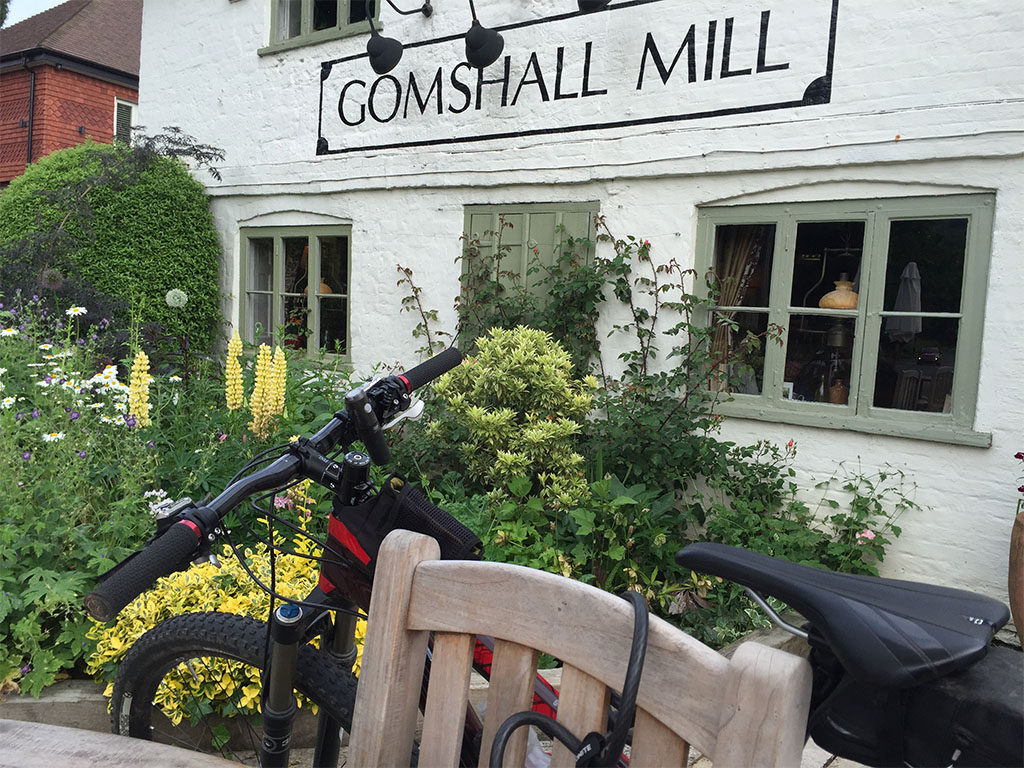 In one coaching session, thanks to Singletrack School I have improved not only my MTB bike handling skills and my climbing but more importantly my mindset.  Things can only go up from here.

This entry was posted in Diet - What to eat and When to eat it, Mountain Biking and tagged British Cycling Coach, cycling, Gomshall Mill, Hills, mountain biking, Singletrack School, Surrey, Trek. Bookmark the permalink.