The joy of discovering what’s on your doorstep becomes a totally different adventure when starting from other peoples front doors, particularly when it means being in another city.

Marylebone Station may be a stones throw from Marylebone Road but it has a sense of charm and atmospheric calm about it with its grand entrance, small concourse and array of coffee stops.

It was midmorning. Gone were the commuters, the hustle and bustle of ticket barriers open and closing in record time leaving a slightly surreal and relaxed attitude from fellow travellers. 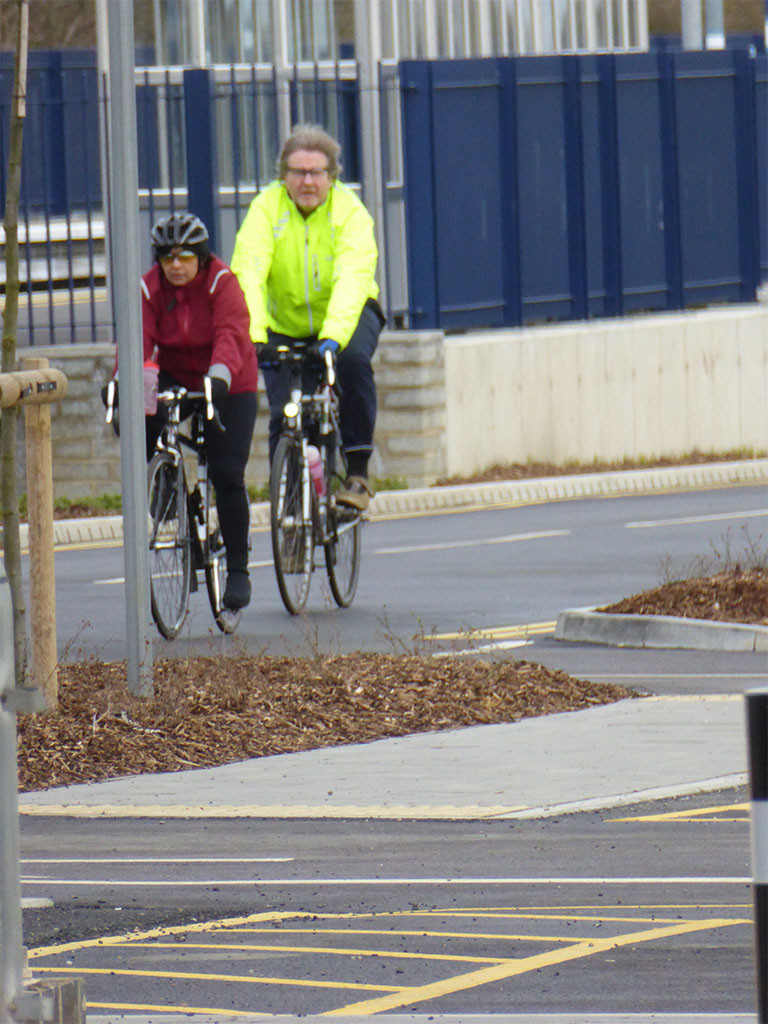 Chiltern trains on a Monday morning are very chilled, the train carriage was quiet and practically empty. In no time at all we were going through West Hampstead station and out into the countryside. High Wycombe then Bicester (are there bicycle shops in Bicester?) before reaching Oxford Parkway to meet two fellow London Brompton Club peeps. 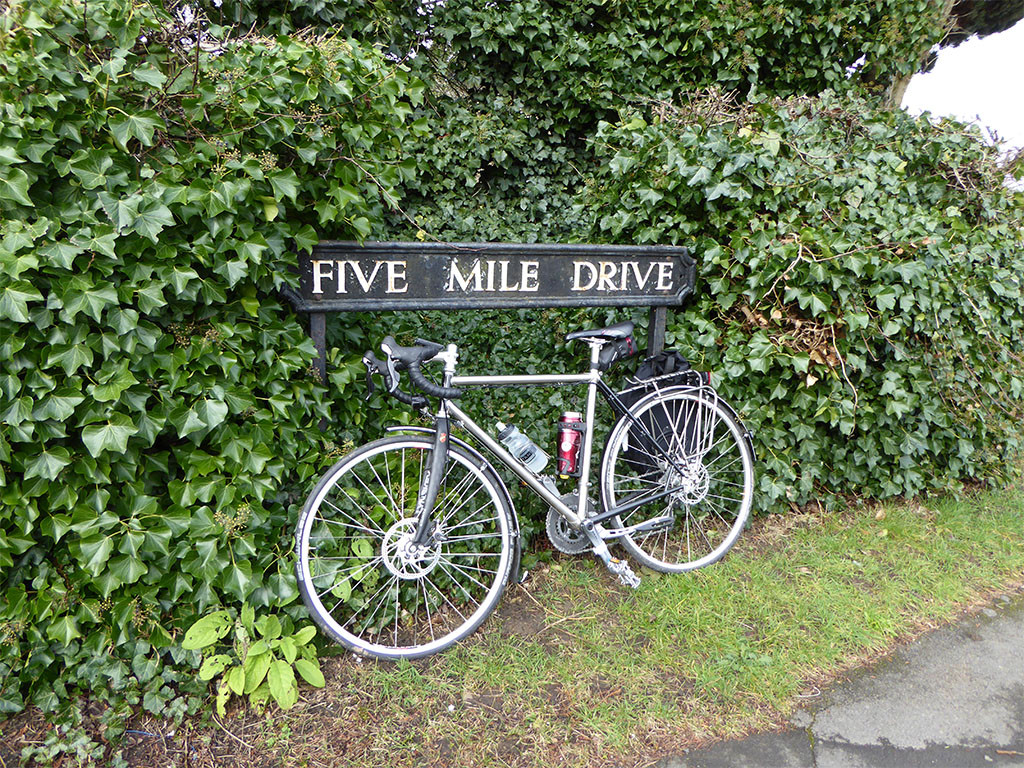 Sportifs and audacious audaxes are sitting in our 2016 calendar so today’s ride wasn’t just to chit-chat and pootle.  Big wheeled bikes replaced our Bromptons and 35 miles were ahead. A quick stop at a uniquely named road before leaving urban life behind as the roads narrowed, traffic disappeared and rural Oxfordshire showed how very pretty it could be. 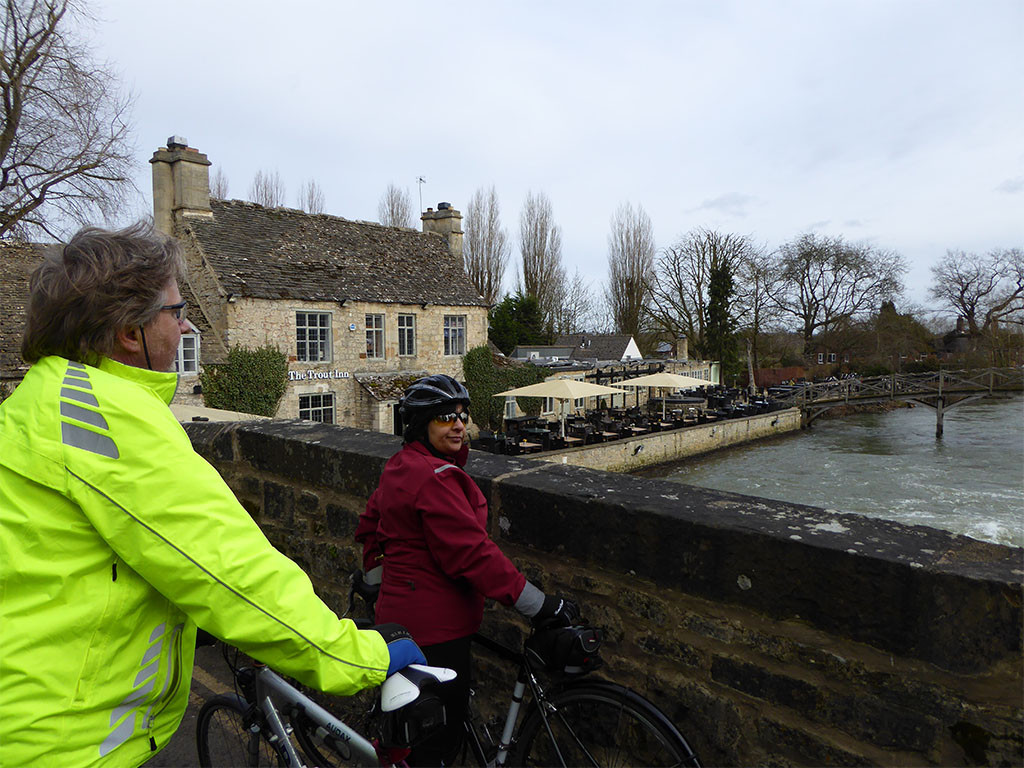 Thatched cottages, chocolate-box villages and five rivers that all form part of The Thames were eye-openers to the contrast of the Capital. Granada TV’s location manager must have had a field day choosing suitable filming spots for Inspector Morse and later, Lewis. We stopped to take a pic of what was their local, The Trout Inn.  The sound of the Barrington Phelong theme tune filled my head and memories of the late John Thaw came flooding back to me. 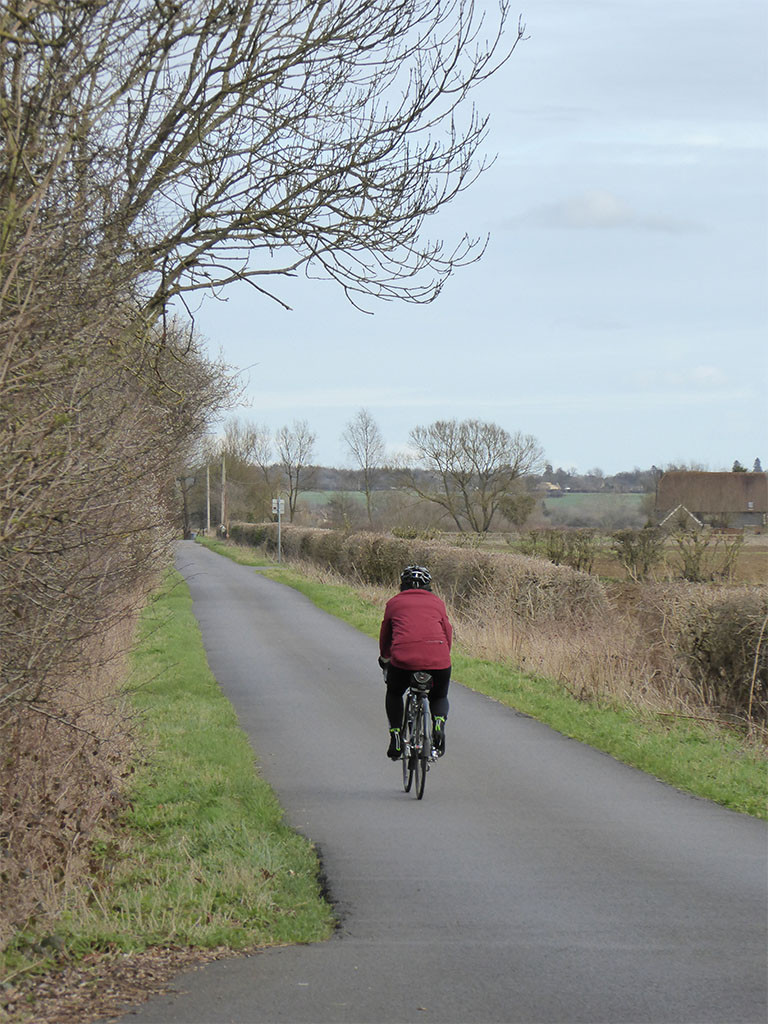 Back on our bikes, we rode along roads that could have been in Normandy.   Narrow, straight and surrounded by agriculture. Ploughed fields on one side, cattle on the other. Pretty farmhouses surrounded by goat and chickens, skwarking about as they pecked, pecked, pecked the ground for food. The way they stick each foot forward as though testing the water whilst wearing high heels always makes me smile.

The only hill of the day was half the height of Ditchling Beacon, a steady drag for nearly a mile. My recent effort on the Brompton up Tulse Hill put me in good stead. Whizzing down the other side, along busy roads, tarmac that should put the council to shame followed by roads that were an absolute joy to cycle along. In the distance, the Buckinghamshire Hills looked high and mighty. Clearly a challenge that must be conquered but on another day. 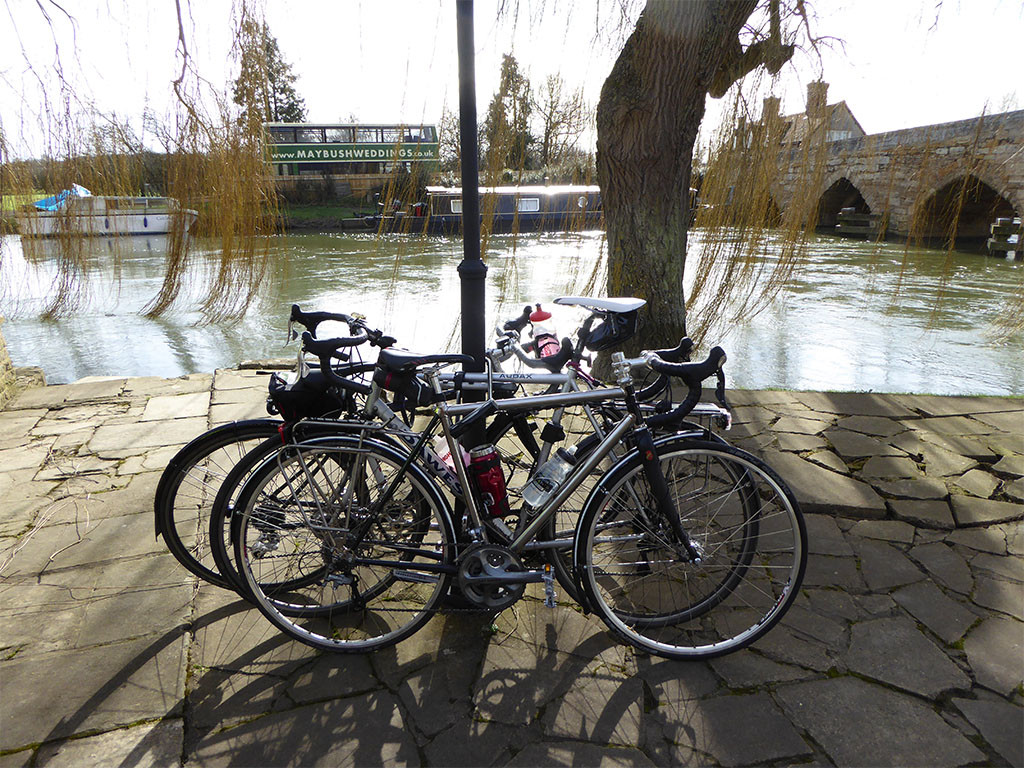 The Rose Revived at Newbridge provided the perfect backdrop for lunch. What a lovely find. Somewhere to stay as well as eat.  Definitely on the list for a return visit, for food or a weekend away.  The chefs definitely know what they are doing and we lingered longer than we should have done.

Out into the sunshine, the air was warmer and we pedalled our way through village after village. Real duck ponds, little water ducts running along the side of the road, red Kites overhead – so much to see. 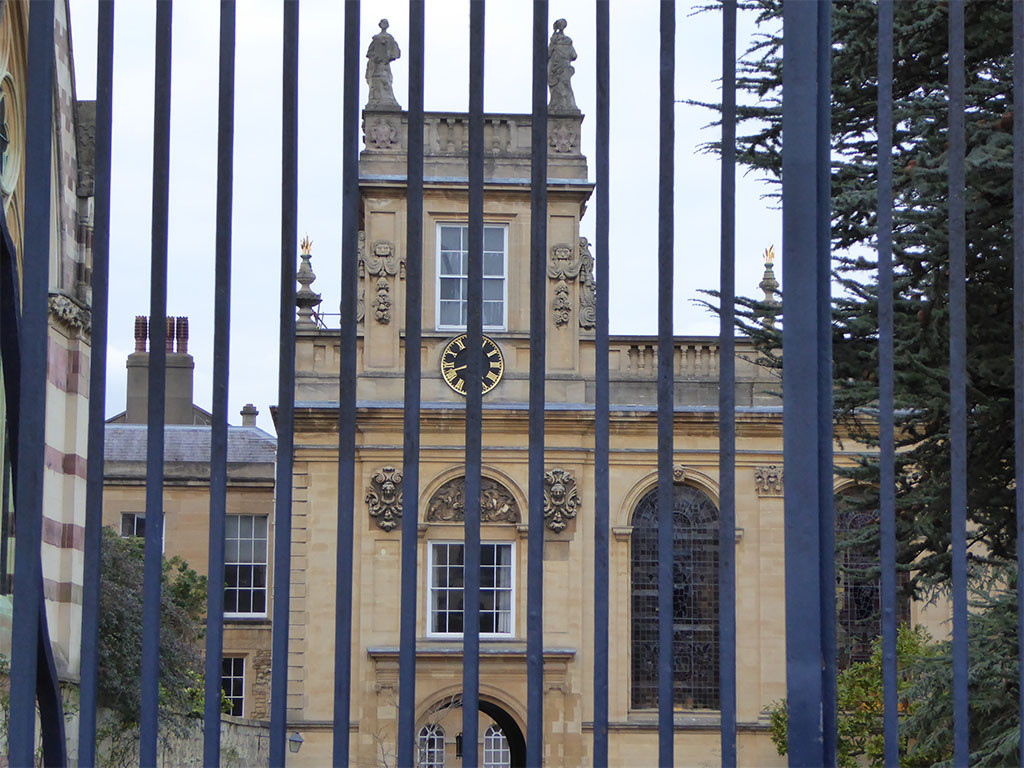 Once in Oxford, Trinity College and architecture that was so familiar from TV. Cycling under a walkway, passing the walls of Jericho it amazed me how much Morse I had seen. Just time for a few cups of tea and the presentation of home made loaf, putting the awe in awesome. It is unlikely that it’s going to last long. 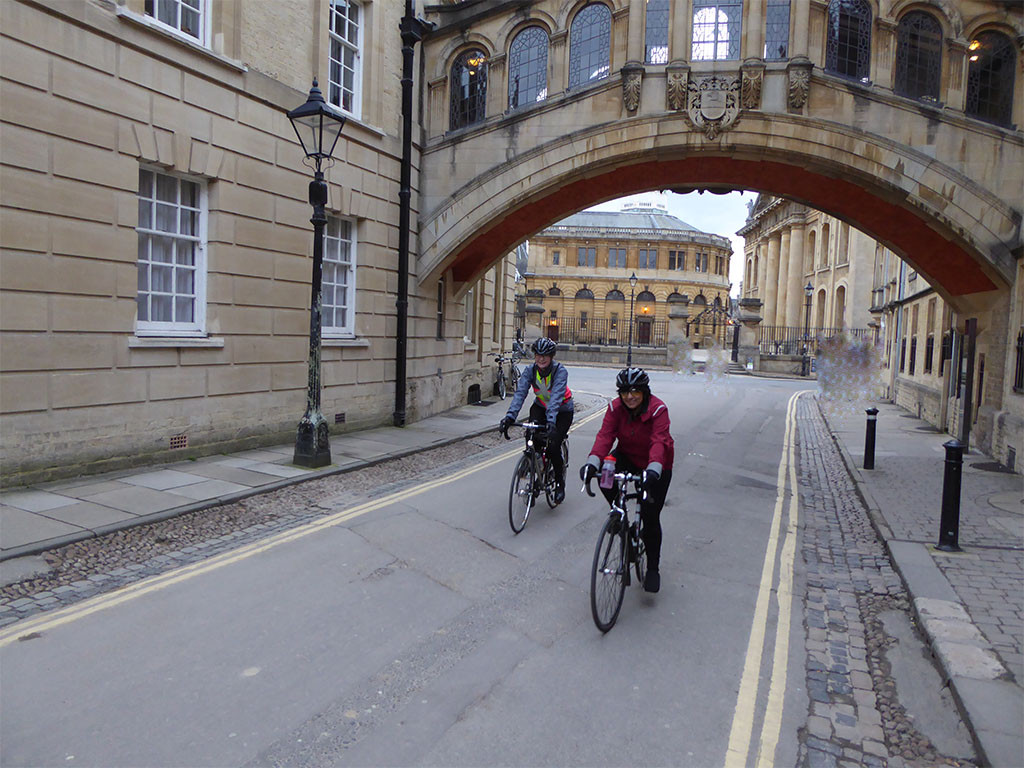 As we cycled back to the station, the air temperature had dropped as had the sun and it felt as though we were in the middle of a Friday night ride somewhere.

Taking a big wheeled bicycle on a train may be quite stressful if reservations are not always available – turn up and find out – but it is the perfect combination to explore parts of the country not seen before. No passport or aeroplane required, not much luggage, just pedal and go. 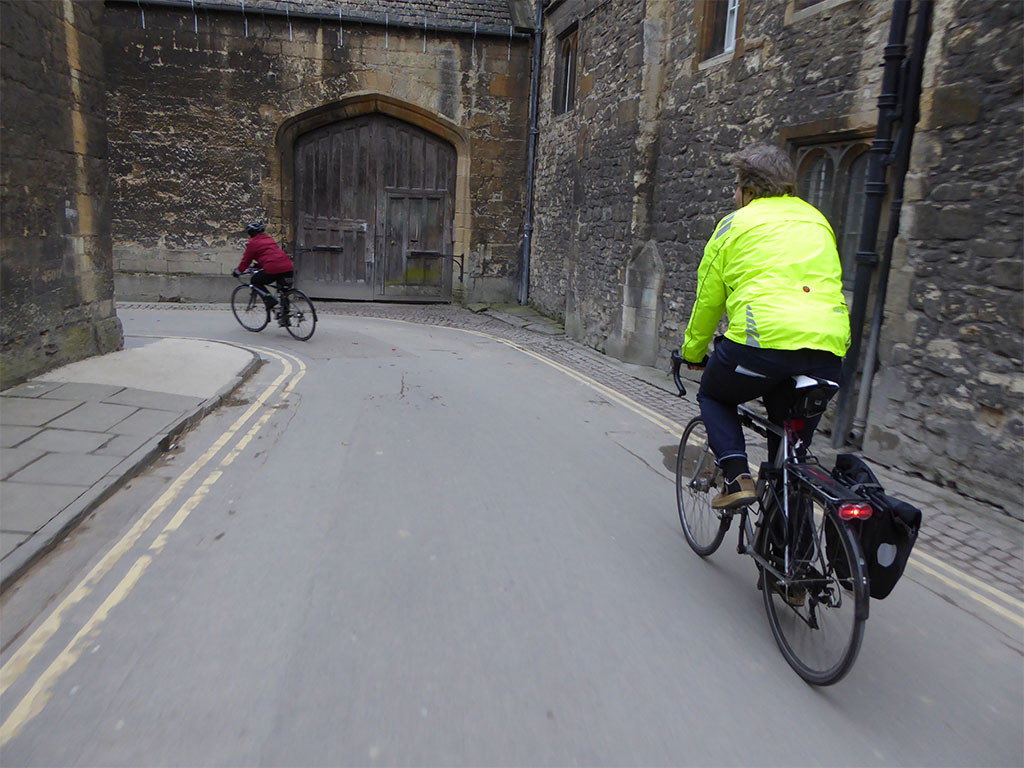 Apparently local cycling clubs in the area may well allow visitors to join them for the day and are definitely worth seeking.   Route here 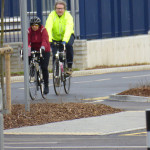 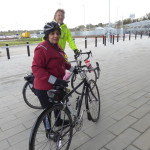 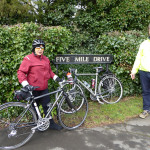 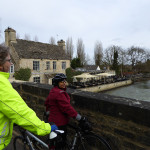 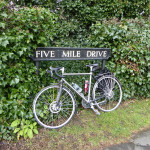 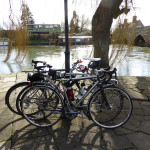 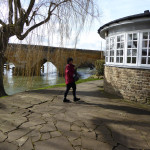 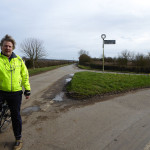 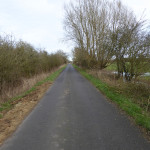 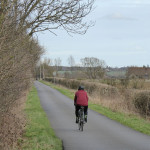 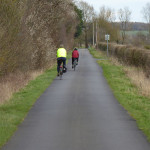 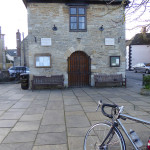 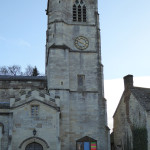 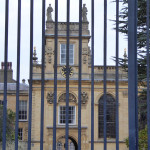 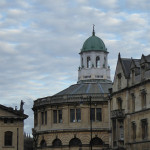 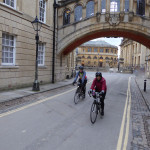 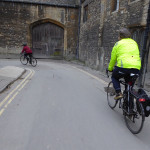 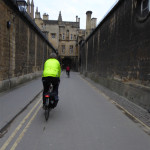 This entry was posted in Diet - What to eat and When to eat it and tagged Barrington Phelong, cycling, Marylebone Station, Morse, Oxfordshire, The Fridays. Bookmark the permalink.