The rain had stopped, leaving twinkly reflections of nighttime London light and life in and out of the gutter puddles. A pub door opened and boozy banter filled the cold and silent air. Further down the road a dog was trying to pull its owner back home and into the warm. 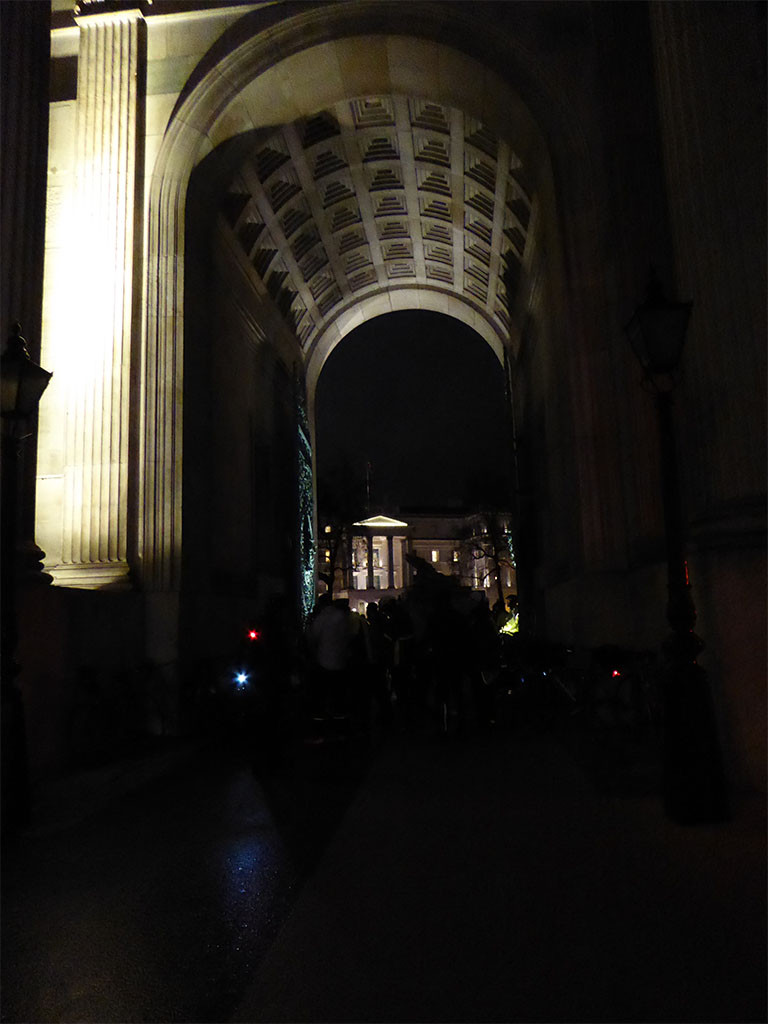 Iconic Wellington Arch sheltered a group of cyclists from the cold. Hellos and Hi Viz abounded, people were introducing themselves to each other in the way that only The Friday’s can. 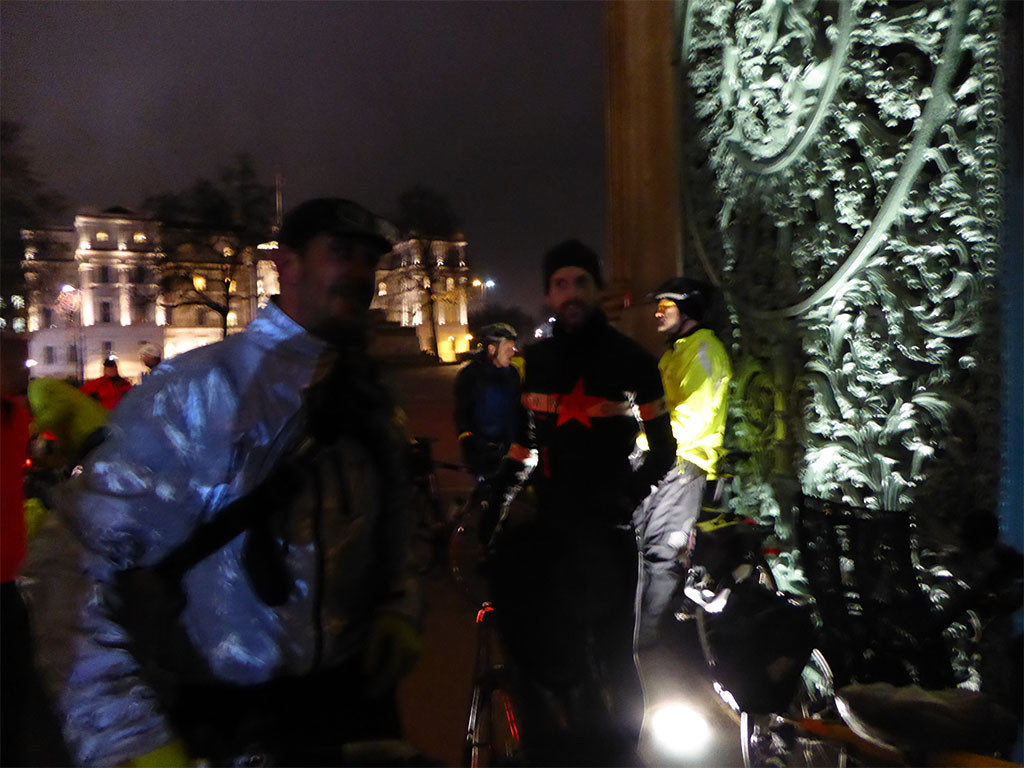 Big wheels, small wheels, tourers and pro bikes all took their place. The roll call remained unrolled until the arrival of the All Up Man. The echo of right, left, easy and bollards drifted away with the traffic followed by the call of All Up and we were away. 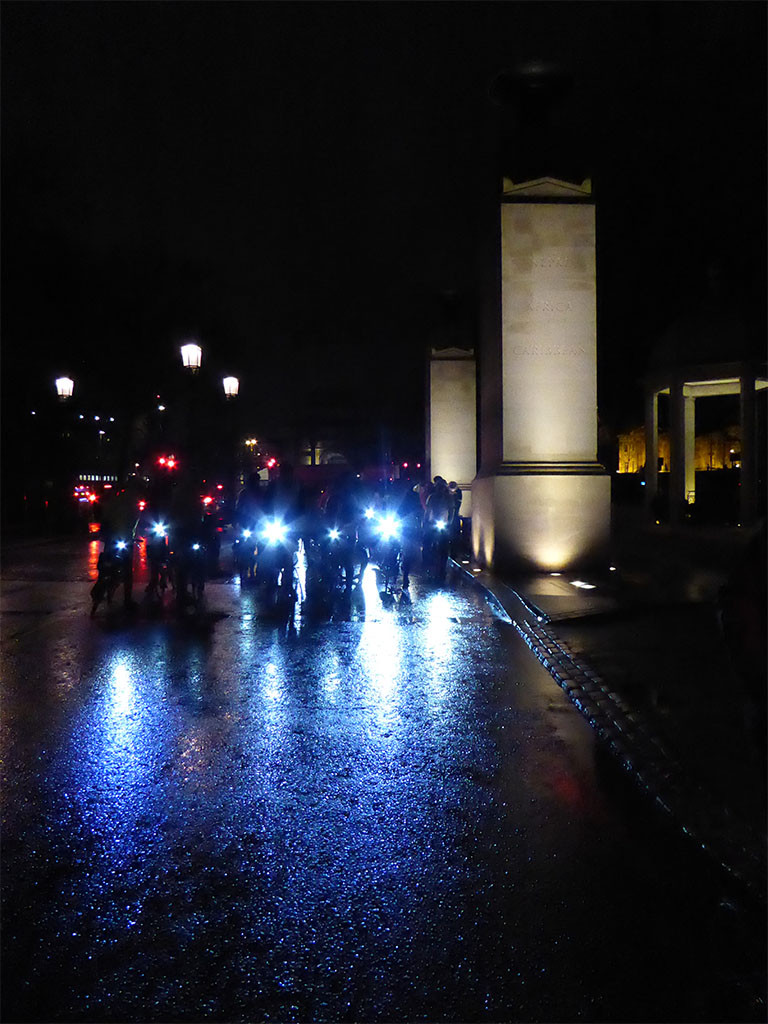 Down Constitution Hill – impossible to enter as it has been dug up as one of Boris’s Bicycle Broadway’s we swooped around Buckingham Palace and into Parliament Square. Being at the front I found myself way marking until the sound of All Up had me leaping on my bike and following the group over Westminster Bridge. 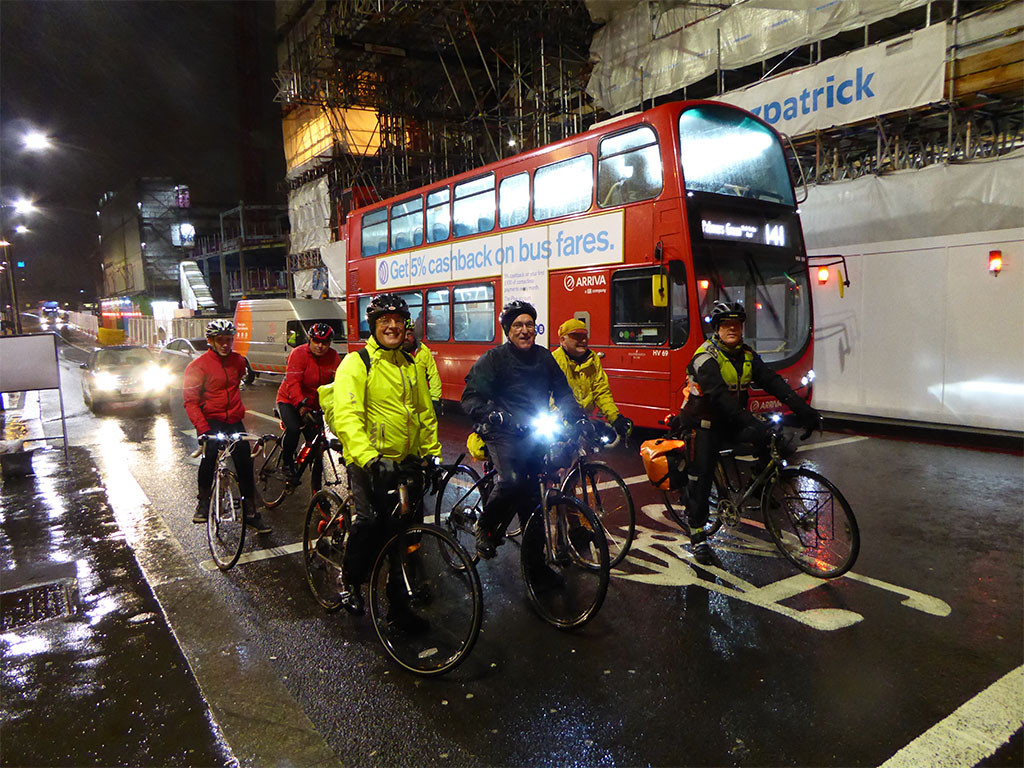 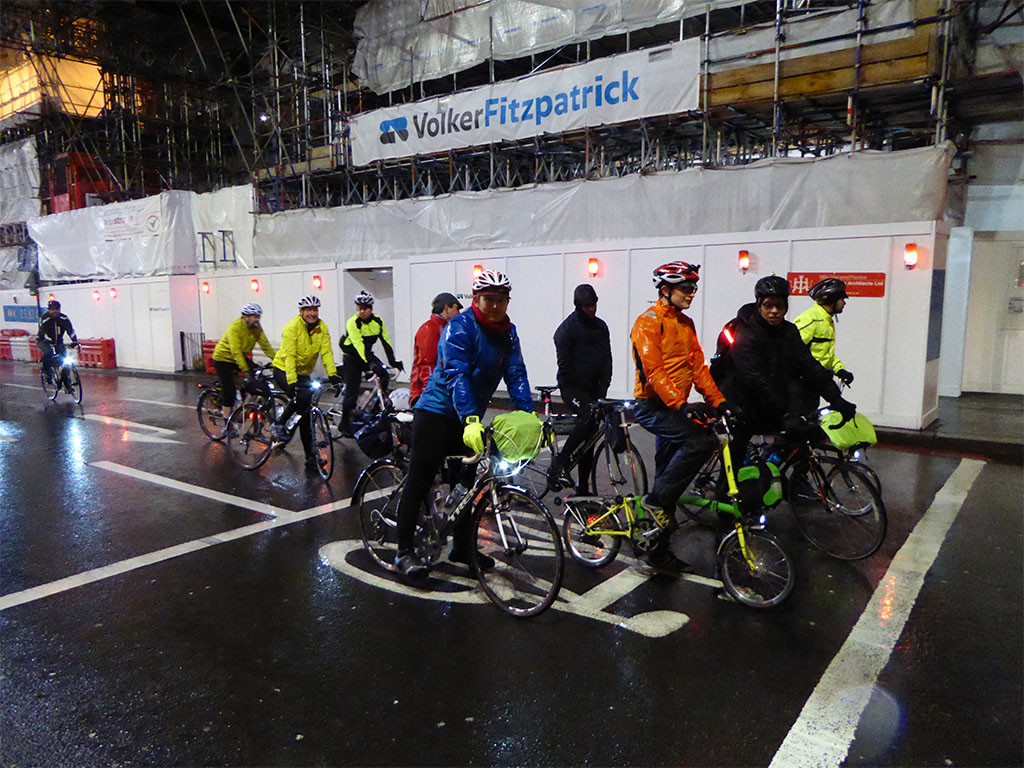 Over London Bridge to-where a way marking stint took a little longer. And longer. And longer. Eventually I called the Ride Leader to check that I hadn’t been left behind. I hadn’t – the P******* fairy was waving her wand about and the All up Team were doing their stuff.

20 minutes later I could only count my lucky Friday stars that the tip to put a pair of cashmere socks under my Sealskinz socks, then overshoes was keeping me warm. Further down the road I could see Stuart G way marking the next junction and he was in shorts! My winter Castelli leggings and Gore overtrousers were a good choice but clearly I need to toughen up. 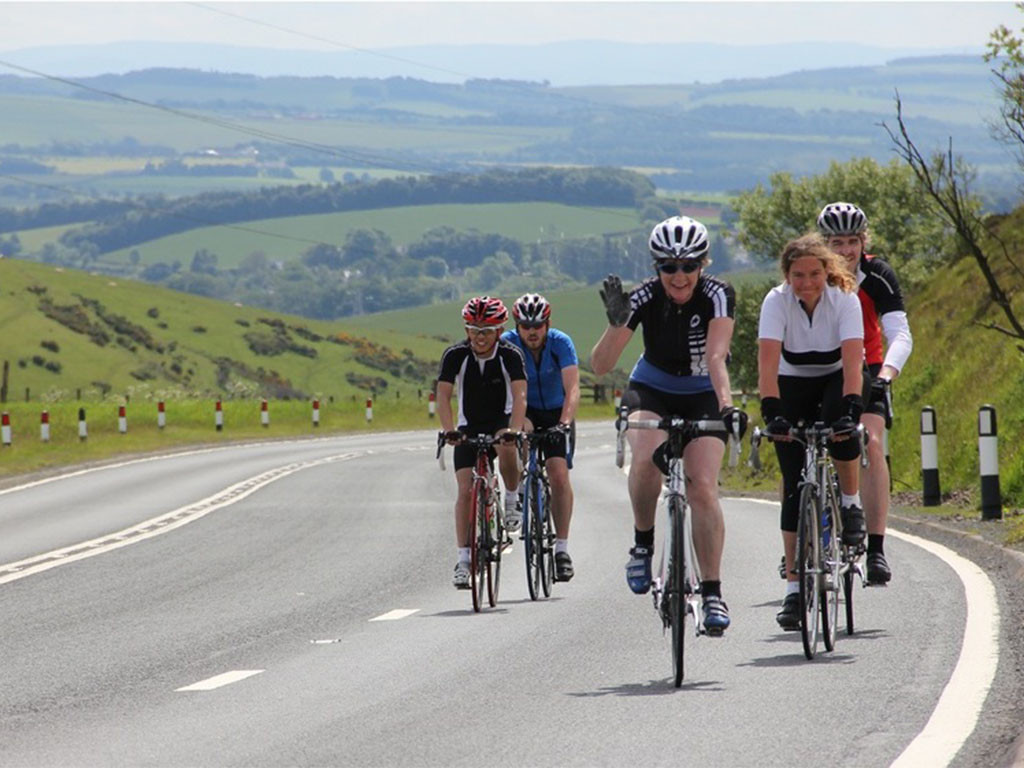 Eventually I saw the face of a man who took this pic and who served tea to all of us cycling to Scotland in 2012. Not in a van this time but on his Brompton, promptly followed by All Up team and off we went. 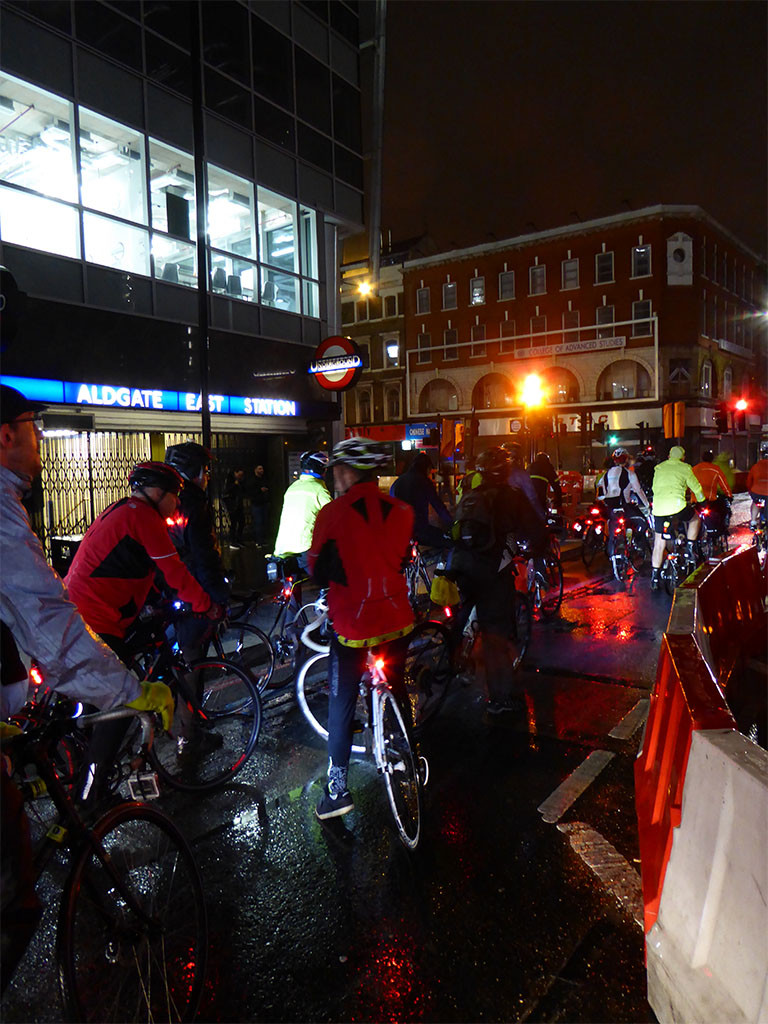 The diabolical confusion of the Cycle (not so) super highways was evident. At one point one of our team had to cycle on the pavement as he had missed the entrance to the lane and there was no other way in.

Further on, a police vehicle blocked the road after a road traffic incident and the sound of beeping Garmins could be heard as we all went off course.

Marking a junction in Ilford a somewhat unwanted conversation with a slightly inebriated local had run its course and I was beginning to wonder what would happen next. It was clear my avoidance of naming the club by saying we were all just friends had been a startling thought. “What? All of you? All friends??”!! Right on cue a rather loud and don’t-mess-with-me toned “Allllll Upppppp” hit the airwaves and I leapt on my bike saying sorry I have to go now.

A few junctions later I found myself at a roundabout with enough time to eat some Daylesfords flapjack with my flask of tea. Picnic at Hanging Rock is one thing but picnic At the Roundabout is something else. 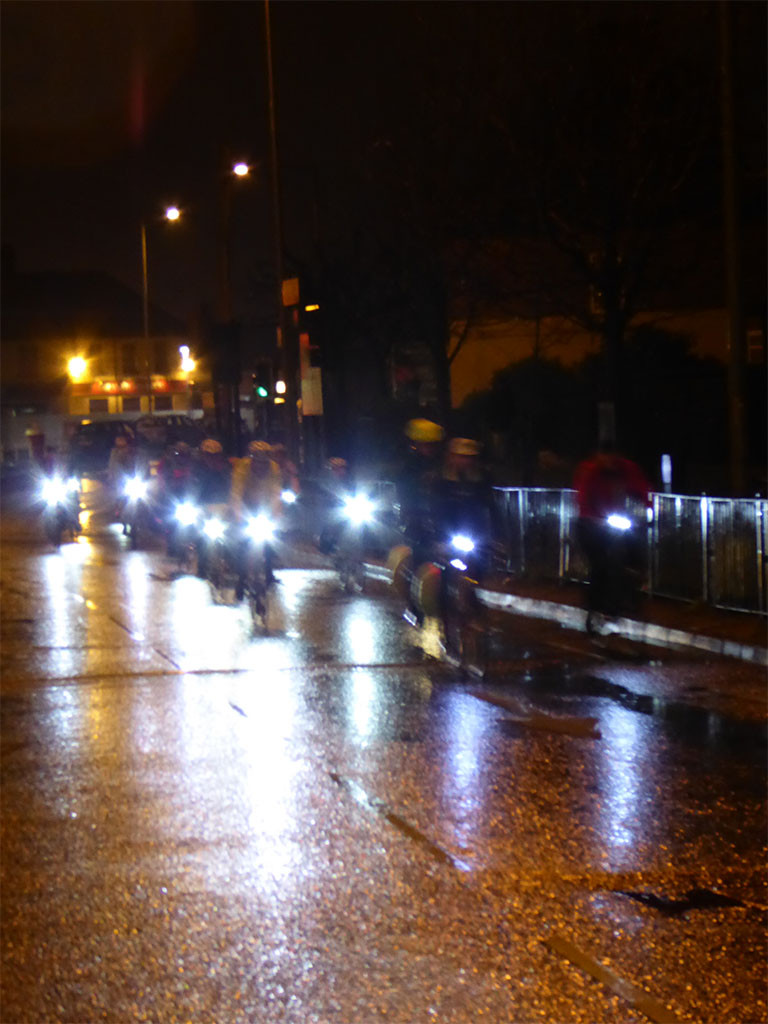 As people whizzed by I could wave and smile at familiar faces before leaping on my bike and haring to the front again.

Long distance cycling introduces elements of activity I never imagined. To find myself asking the ride leader to point out a suitable field in which to pee sounded quite absurd but on a night ride it seemed perfectly normal – even if it did fall on deaf ears! 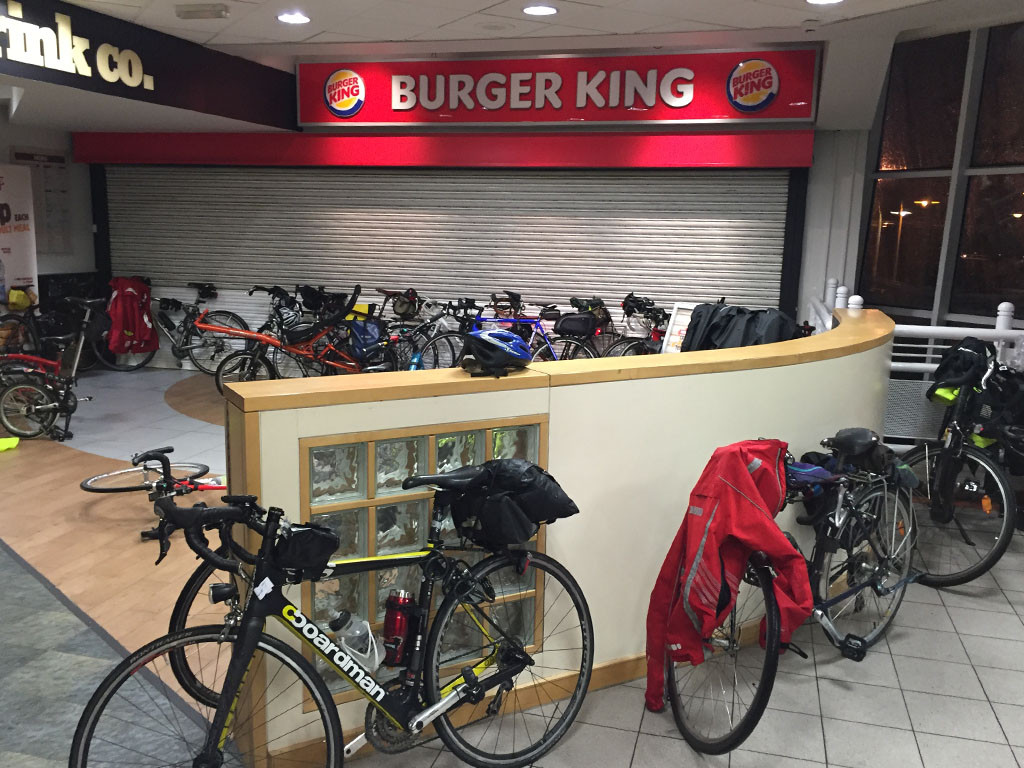 At 3.30am we were bounding our way into the Junction 31 M25 motorway services where a bit of drying out was welcome. Not, however, as welcome as the sugar free cake that a friend had baked and which was being escorted along the route by her husband. It was absolutely delicious and a whole lot better than the earlier flapjack that just tasted of sugar. 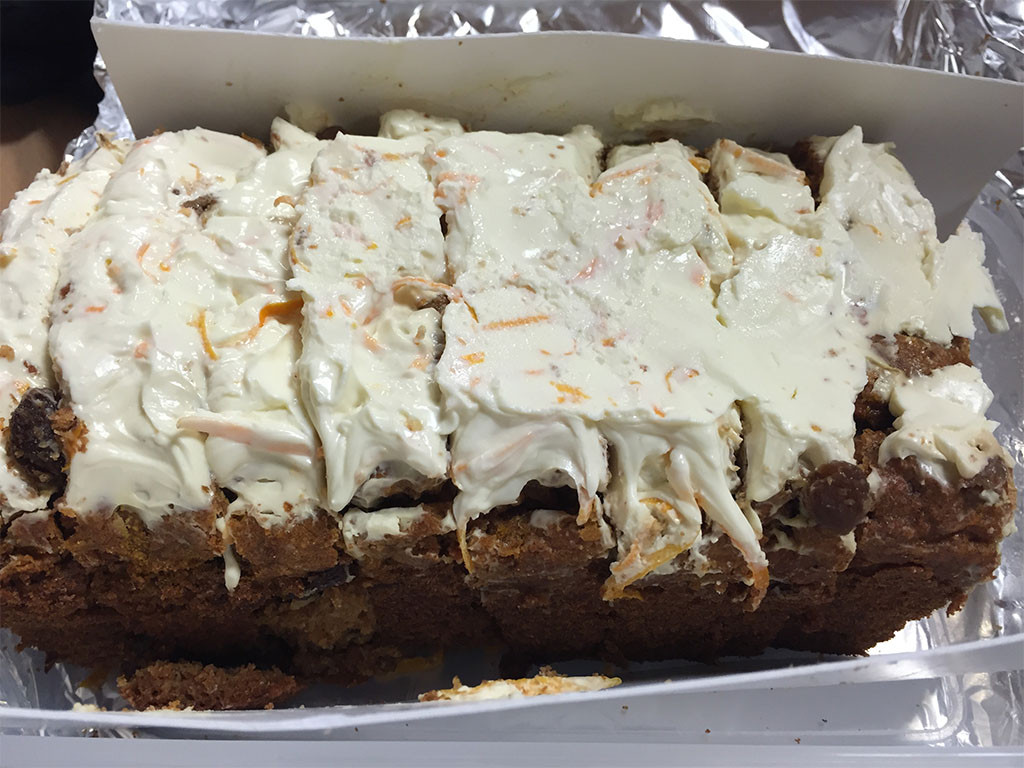 The variety of bicycles became even more apparent as we all sat down and chatted with people who in the darkness we hadn’t noticed were on the ride. 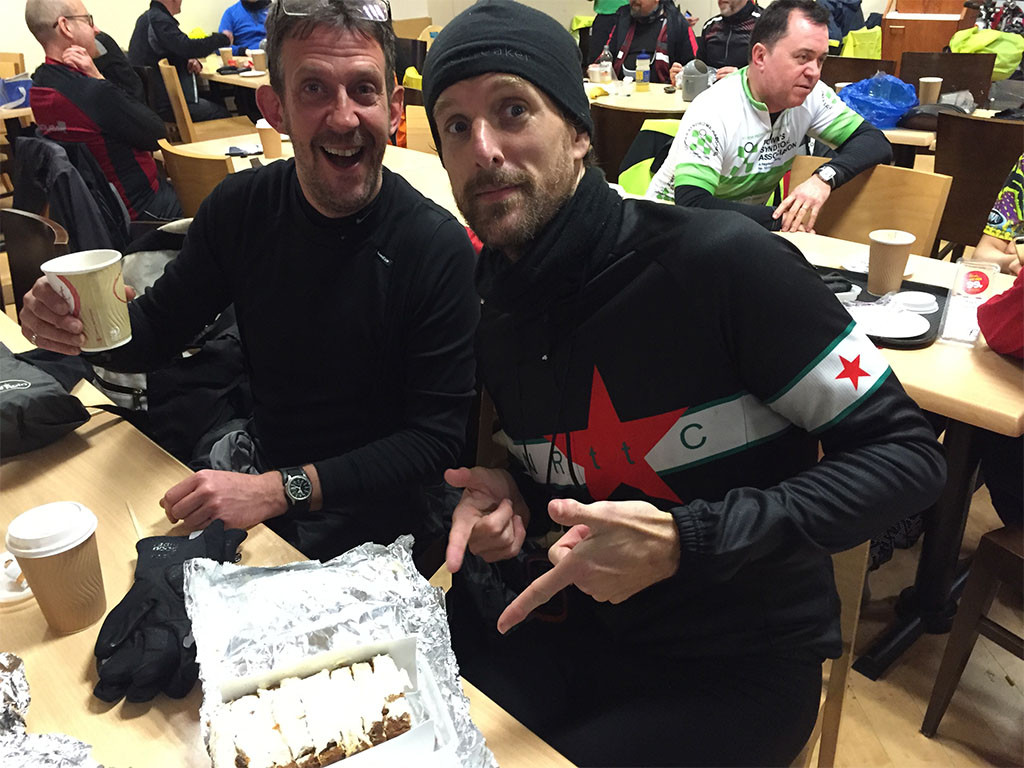 Andy and his apparently unrelated friend although to the rest of us is clearly his twin were inseparable. They had been happily in conversation all night, even doing synchronized waymarking together (an image sadly not caught on camera) and only separated for cake. 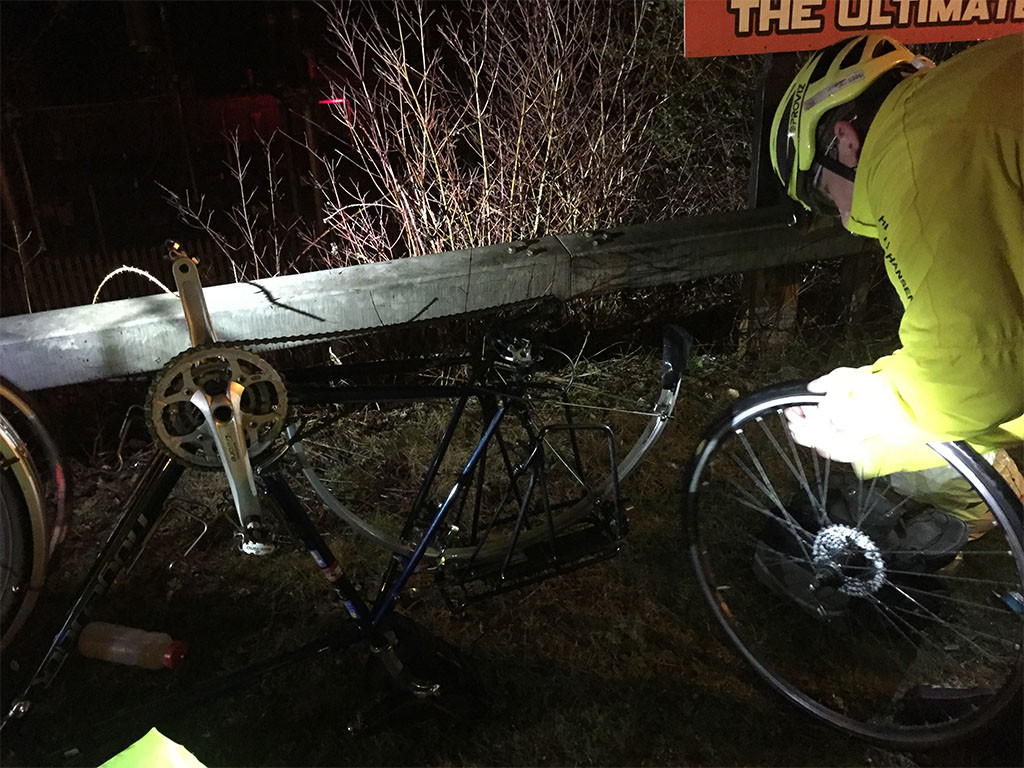 At 4.30am we cycled out into the night with the echoes of the ride leaders booming message “I hope you’ve all checked your tyres” moments before he ran over a rather revengeful piece of glass that was followed by a rather loud expletive and an unexpected delay a few hundred yards from the motorway services stop. I managed to ask if he had a pump, before taking cover behind a lamppost! 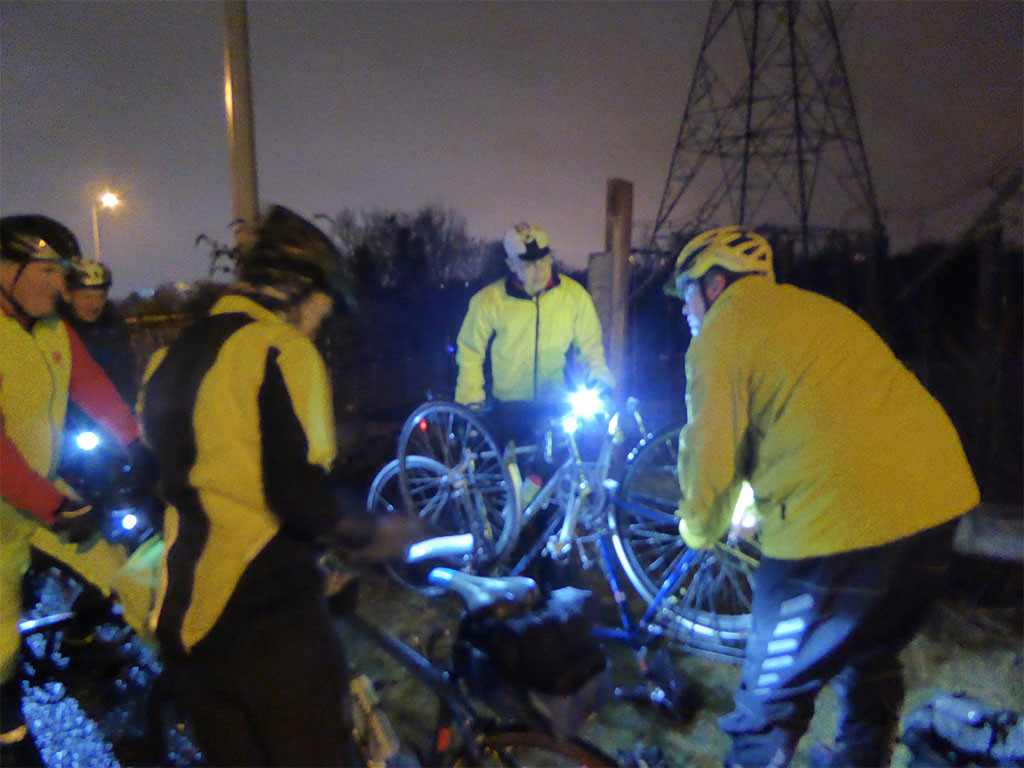 We all stood around chatting, the all up team offer of help was declined and the visitation was fixed. The next 10 minutes of cycling involved a very detailed conversation about how that piece of glass was on the road…!! “You were just unlucky”, I said just before I stood at another junction to watch the carnival of Friday cyclists go by. 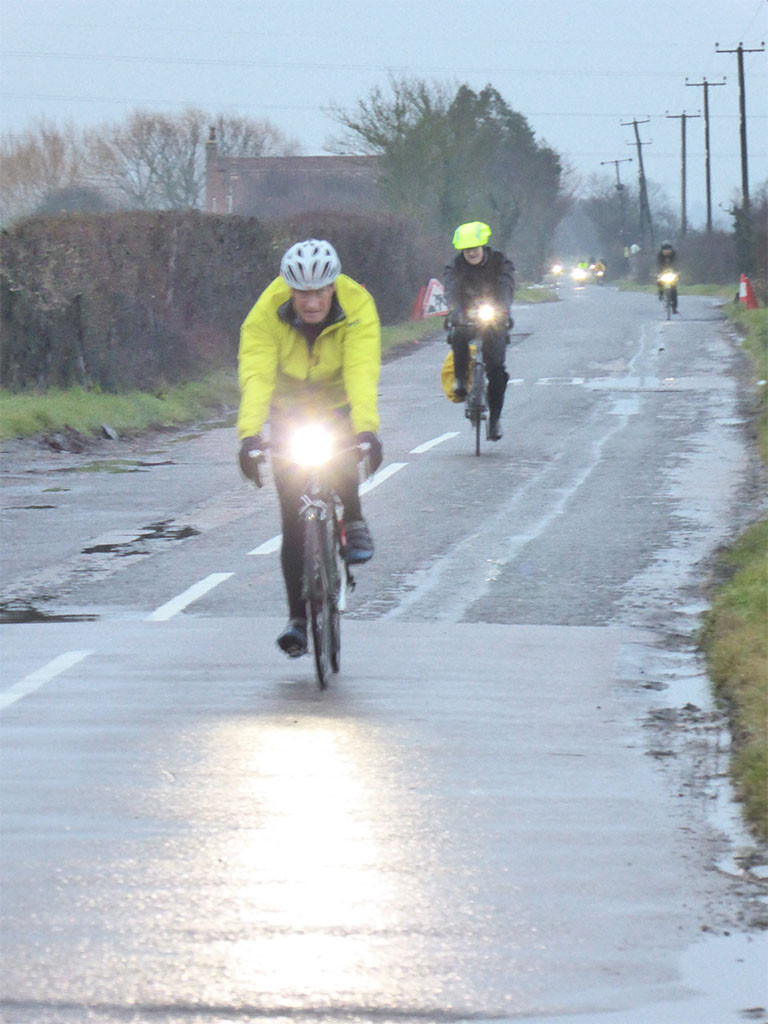 Parts of the route were new to The Fridays but just lovely. As we moved into rural Essex surrounded by fields of crops and cattle the sun began to throw some light on where we were. And it was flat (mostly). 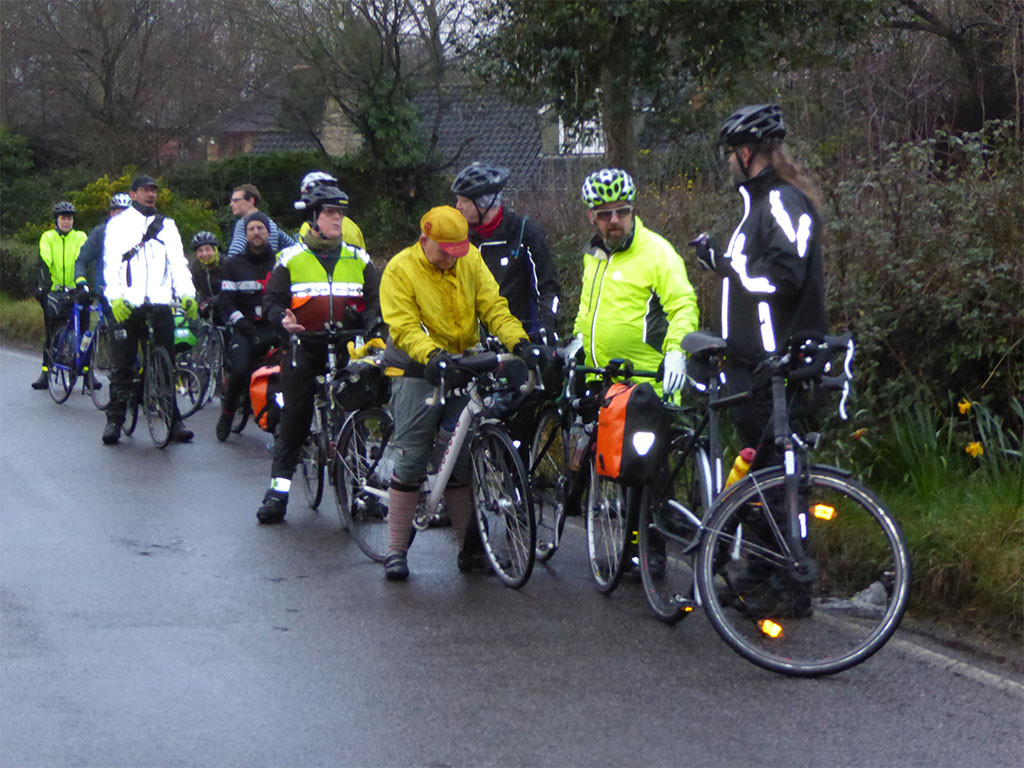 Another visitation took a little longer than usual – so much so that after about 40 minutes the Ride Leader sent most of us on our way with a new Leader. Off we went, happy to start warming up again and we had been moving for no more than five minutes when we were overtaken by a rocket on a bicycle. The Ride Leader flew passed us at tremendous speed and was back in charge. A couple of seconds later, he pointed to a junction and asked a fellow cyclist to waymark. “Is the All Up Team the original or the second version?” asked the cyclist. “The original” I replied, slightly crossing my fingers that this was true. I double-checked before the next junction and all was well. 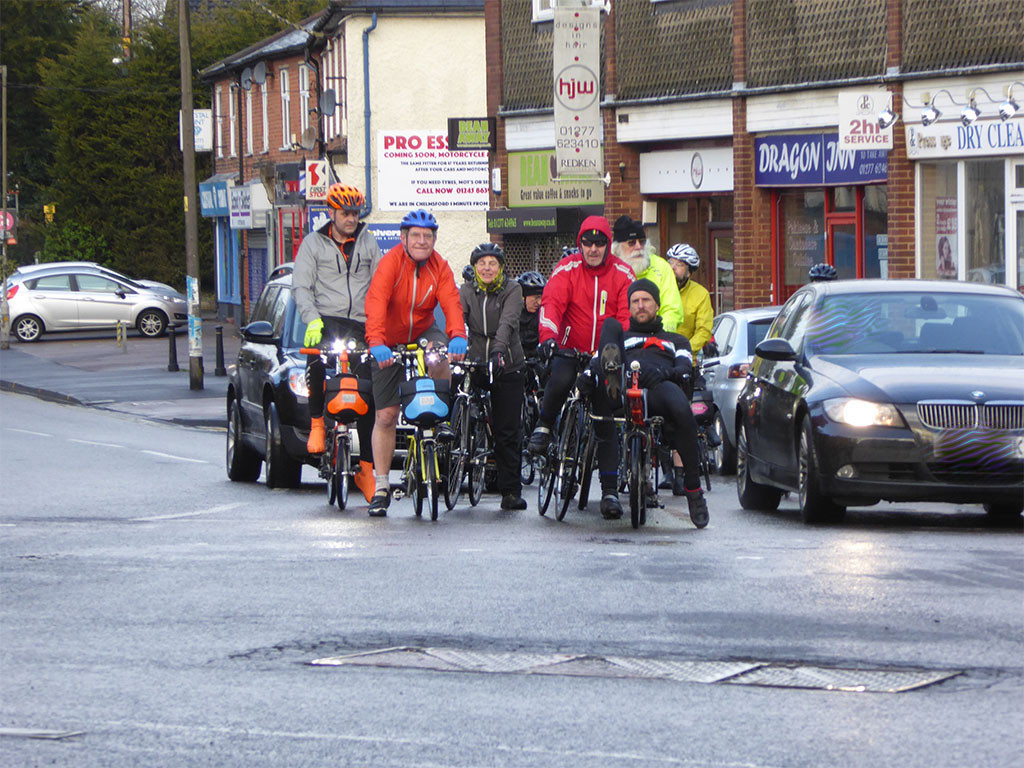 We passed a house with a fellow cyclist standing outside. As he joined the ride he said “I was born in that house”. A little further on another cyclist pointed at a restaurant and said “40 years ago I took my now wife there on our first date. Took her two years to agree to marry me though”. Clearly the research paid off! 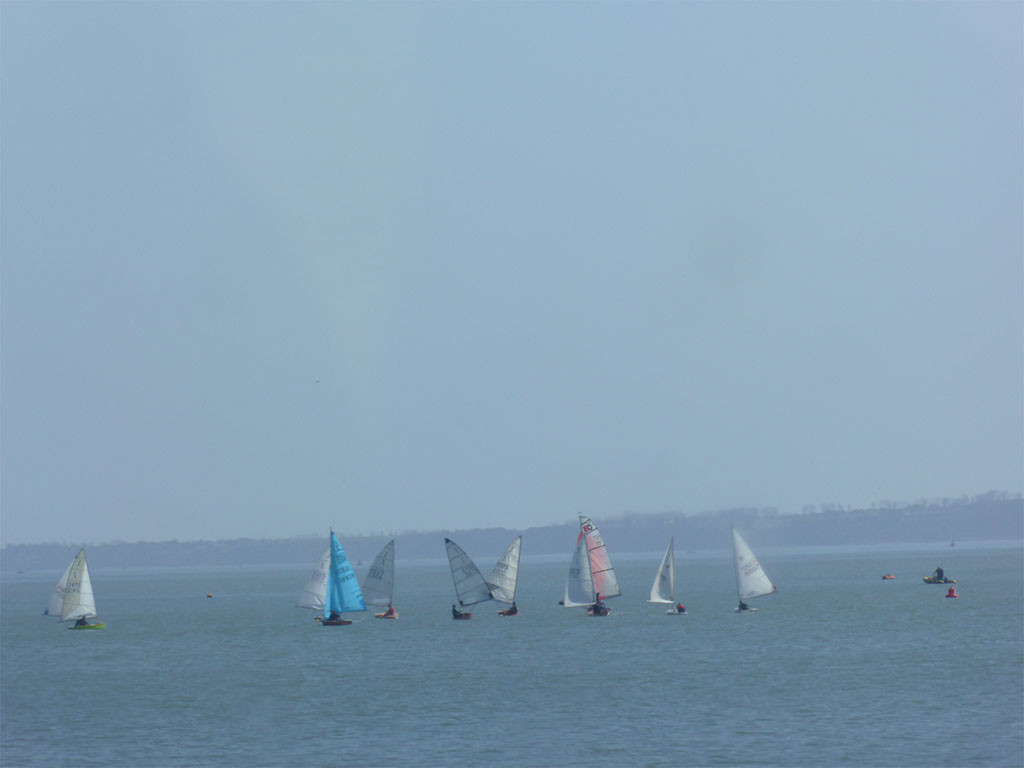 Seeing the seaside appear on the horizon was magical. The Ride Leader had taken a position in the road to give us directions to the café in the way that the host of a party greets you upon arrival. It was an unexpected and lovely touch. 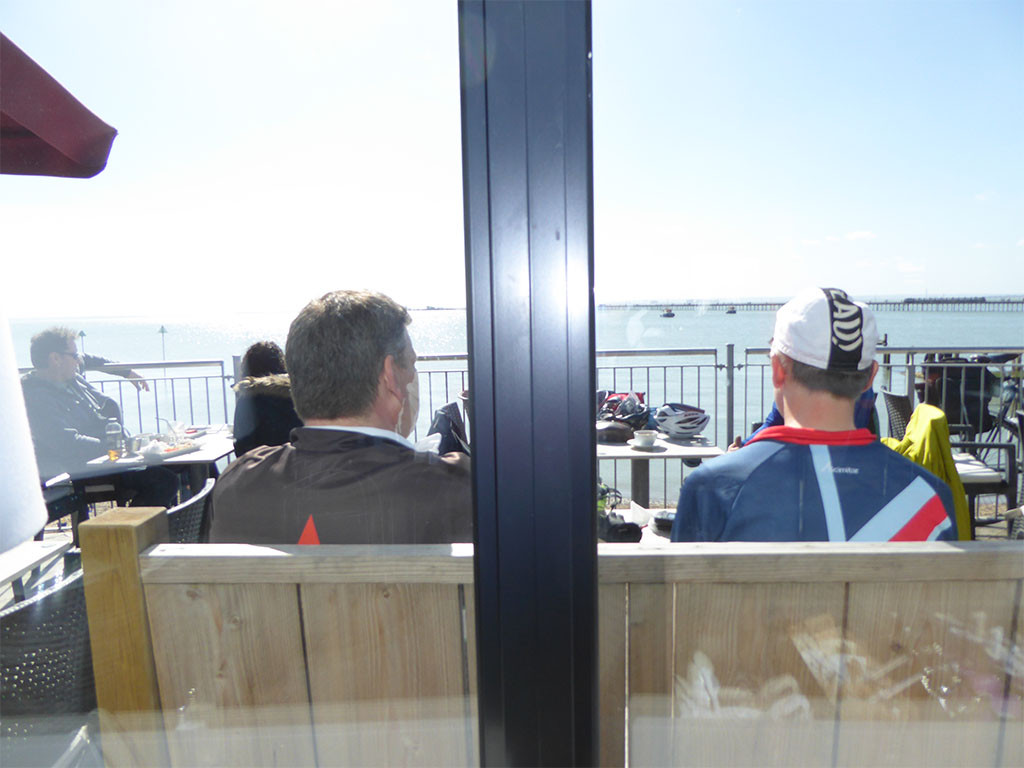 As we piled into the café, we inadvertently took over the terrace and then spent several hours sitting in the sunshine overlooking the beach discussing many things including Northampton Town winning in, err, 1987 and who was Jerry Garcia?

A very civilized introduction to the start of The Fridays season.  It may be a new era of The Fridays as they are without the person who started this incredible journey that has put so many of us achieving distances we never ever thought possible.  I hope we did him proud.  It is true to say that Fridays rides are a very special thing indeed.

Thank you peeps. I hope you’ll all be back.  Pics are here  The Route is here

This entry was posted in Cycling with The Fridays and tagged cycling, Fridays, Gore, midnight, nighttime, Southend. Bookmark the permalink.